Welcome to Willemstad! Willemstad is the capital of the country of Curaçao, a small island in the southern Caribbean Sea. This capital city is characterized by its vibrant and colonial monumental architecture. Not only is the historic area of Willemstad aesthetically pleasing and utterly Instagrammable, but it is also every architecture enthusiast’s dream site.

Due to its unique architectural history and cultural background, in 1997 Willemstad became listed as a UNESCO World Heritage site. Willemstad is one of the 5 capital cities in the Caribbean on this list. December 4th, 2022, marks 25 years of Willemstad being inscribed on this prestigious list. Keep reading to find out what makes historic Willemstad and harbor a unique architectural and historical site you must visit at least once (or twice) in your lifetime.

A brief history of Willemstad

The city’s development and architecture originates from the expansion of Europe in the 15th and 16th centuries. This is reflected in the town’s colonial style town-planning and architecture from the period of Dutch expansion. Great parts of the urban structure and historic townscape of Willemstad remain intact and recognizable to this day. These have proven to have survived over 3 centuries of constant development and change. Over the centuries, many factors have affected the urban structure of Willemstad. Historic Willemstad has survived destructive fires, innovations in the urban planning that led to the building of roads through the town and industrial developments that led to the radical adaptation of the traditional purpose of the historic properties. Nevertheless, Willemstad’s original architecture is exceptionally well preserved with many monuments being authentic in design, materials and craftsmanship. Many narrow alleys are still intact and original street names are still in use. Due to the durability and preservation of the town’s urban structure and architecture, Willemstad serves as a map to understand the town’s historic and social development and continuity throughout the centuries.  The critical elements that were brought together to build the historic area of Willemstad formed and remain a unique ensemble that illustrates the organic growth of the town as a multicultural community. 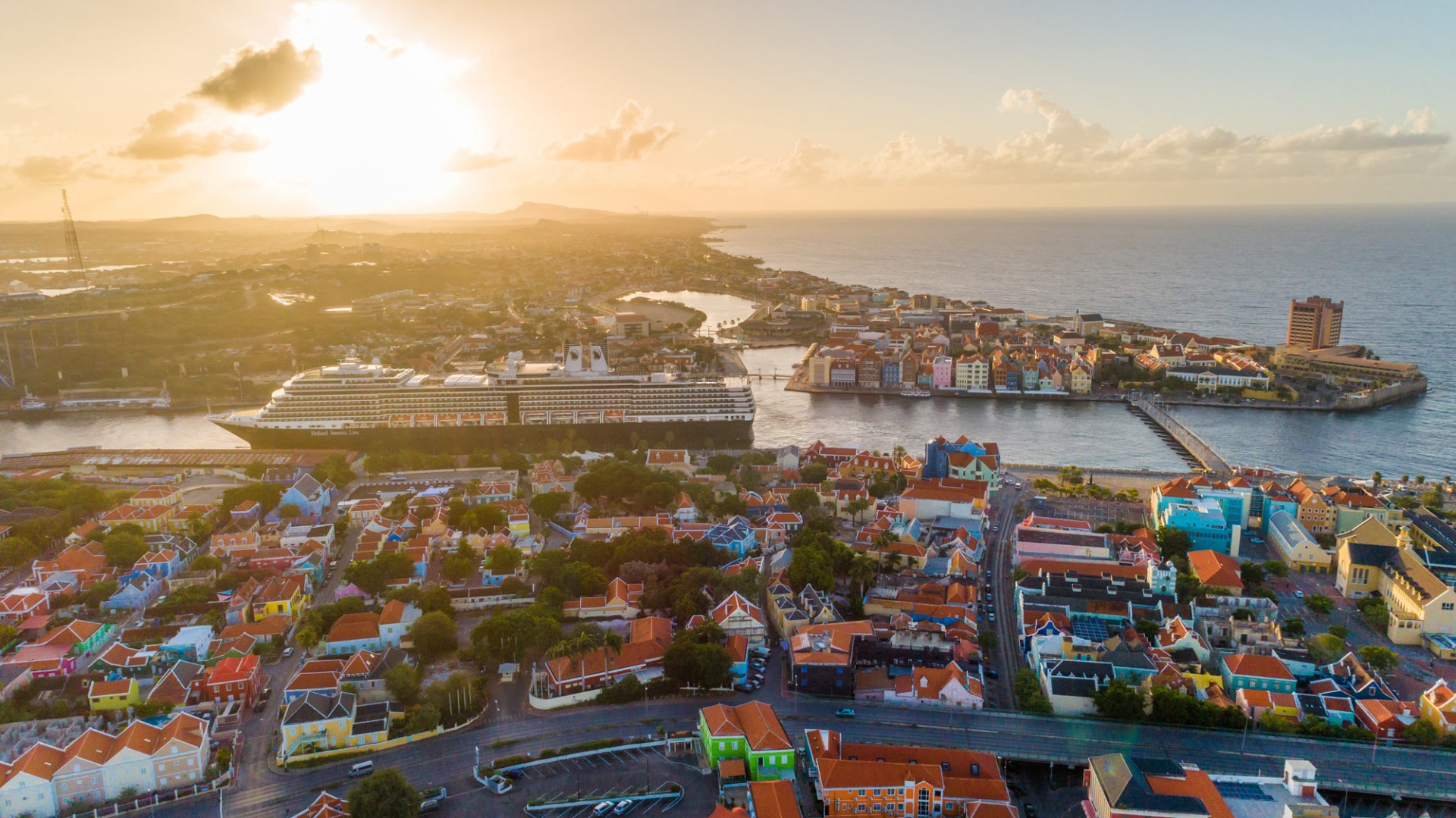 Willemstad’s architecture over the years

Willemstad covers 190 ha and consists of the natural deep-water harbor called Sint Anna Bay, and 4 districts: Punda, Otrobanda, Pietermaai and Scharloo. These district’s architecture reflect a mixture of Dutch, Caribbean, African, Spanish and Portuguese architecture. Over 700 buildings in Willemstad are protected monuments, which makes for about 50% of all the buildings in the inner city of Willemstad. About 90% of properties in Willemstad are privately owned and the remainder are owned by the government or government affiliated organizations.

The historic area of Willemstad aesthetically resembles a Dutch fortified colonial trading center with strong Caribbean influences. Willemstad is a unique example of a relatively small settlement that was both walled (Punda) and undefended (Otrobanda).

The architecture of Willemstad began with direct importation of Dutch styles and materials. Gradually, the area developed its own unique style. The 17th century buildings in the district of Punda had a traditional Dutch style with two or more stories made of brick with high facades and triangular gables.

In the 18th century wooden and stone galleries were introduced to the buildings. In that same century, the Curaçao Baroque style came to develop, which was characterized by facades in a variety of shapes, with the curved gable being the common feature. Since the buildings in the districts of Otrobanda and Scharloo were built on more spacious plots, some buildings in these districts have lavish facades on all sides of the buildings. Several good examples of the Curaçao Baroque style can be found in these districts. These plots add to a lot of green in the city.

In the 19th century, a more simplistic architectural style gained popularity in Willemstad. Curved gables were replaced with straight ones. Galleries were now being incorporated into the fronts of the houses. Good examples of this architectural style can be found in the districts Otrobanda and Pietermaai. 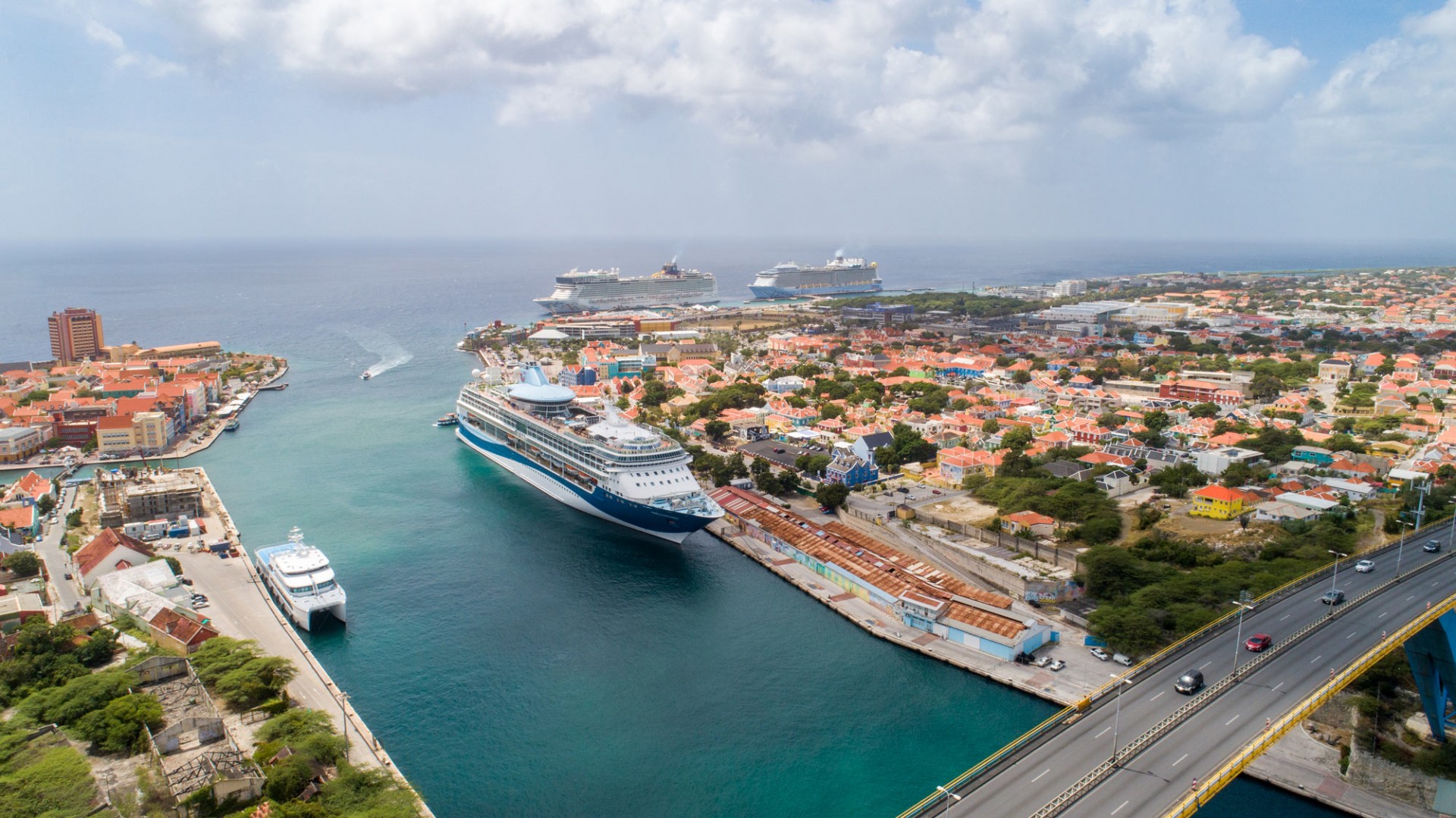 The development of Willemstad started in 1634 when the Dutch established a trading settlement around the harbor Sint Anna Bay. Willemstad has been considered a historic port town ever since. The Sint Anna Bay remains an active port to date. The entrance of Sint Anna Bay was protected by fortifications on both sides, one Fort in the district of Punda called Fort Amsterdam and one Fort in the district of Otrobanda called Rif Fort. These forts are well preserved and remain intact to date. On the Punda side, the fortification on the coastline is closely followed by the colorful and iconic Handelskade, which is the tropical counterpart of the Dutch canal houses.

The first out of the 4 districts of Willemstad to be developed was the eastern side of the Sint Anna Bay known as Punda. The development of the 3 other districts Otrobanda, Pietermaai and Scharloo followed in the 18th and 19th century. Each district has its own distinct characteristics resulting from the usage of different urban planning concepts throughout the years, but the districts share the common characteristic of being the representation of a colorful Caribbean version of European – especially Dutch – architecture. The districts of Willemstad are connected by the natural waters of the Sint Anna Bay and Waaigat, which makes for an even more exciting and picturesque townscape consisting of colorful facades along the coastlines. 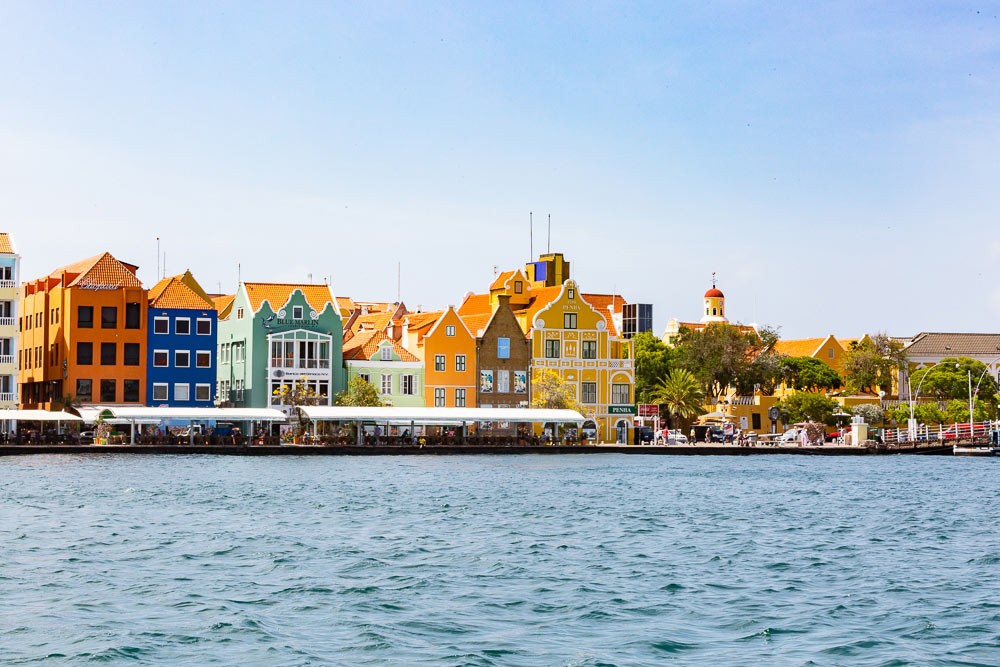 The construction of Fort Amsterdam in Punda in 1634 marked the beginning of the development of Willemstad. Punda was originally a walled district with an orthogonal grid pattern. By the 18th century Punda had many residential properties. The walls around Punda were eventually demolished by 1866, after changes in military strategy. A highlight of this district is the Mikvé Isreal-Emanual Synagogue built in 1732. This synagogue is the oldest synagogue in continuous use in the Americas. 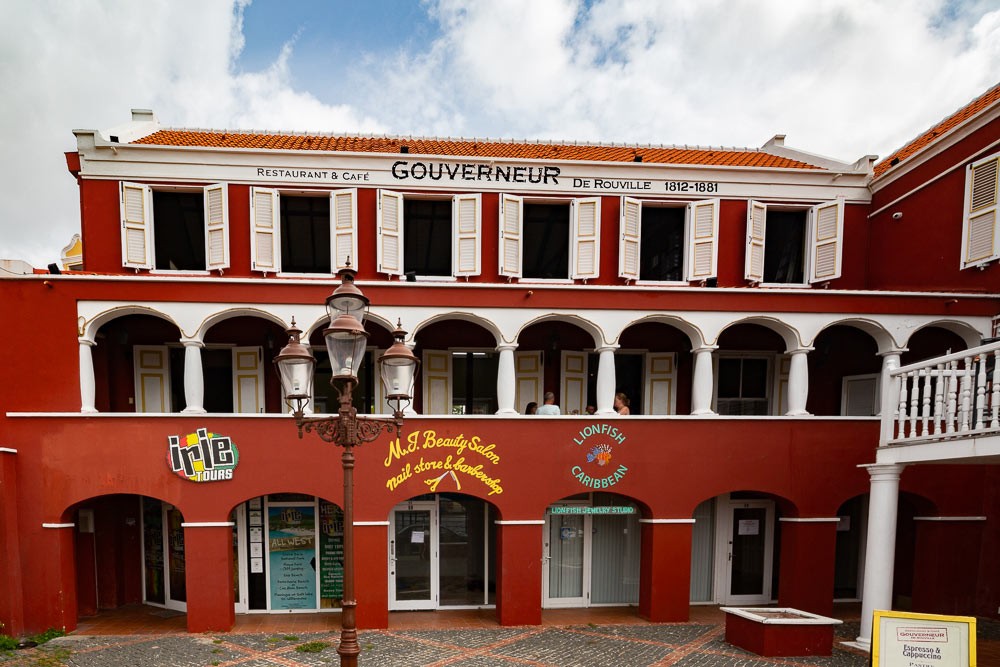 Otrobanda was the second district of Willemstad to be developed and is located at the western side of the Sint Anna Bay. Since Otrobanda was not a walled district like Punda, Otrobanda first developed into a collection of detached buildings on spacious lots that resembled plantation houses. Later on, this part of the city partly developed into a neighborhood for the working class with more density and small alleys. 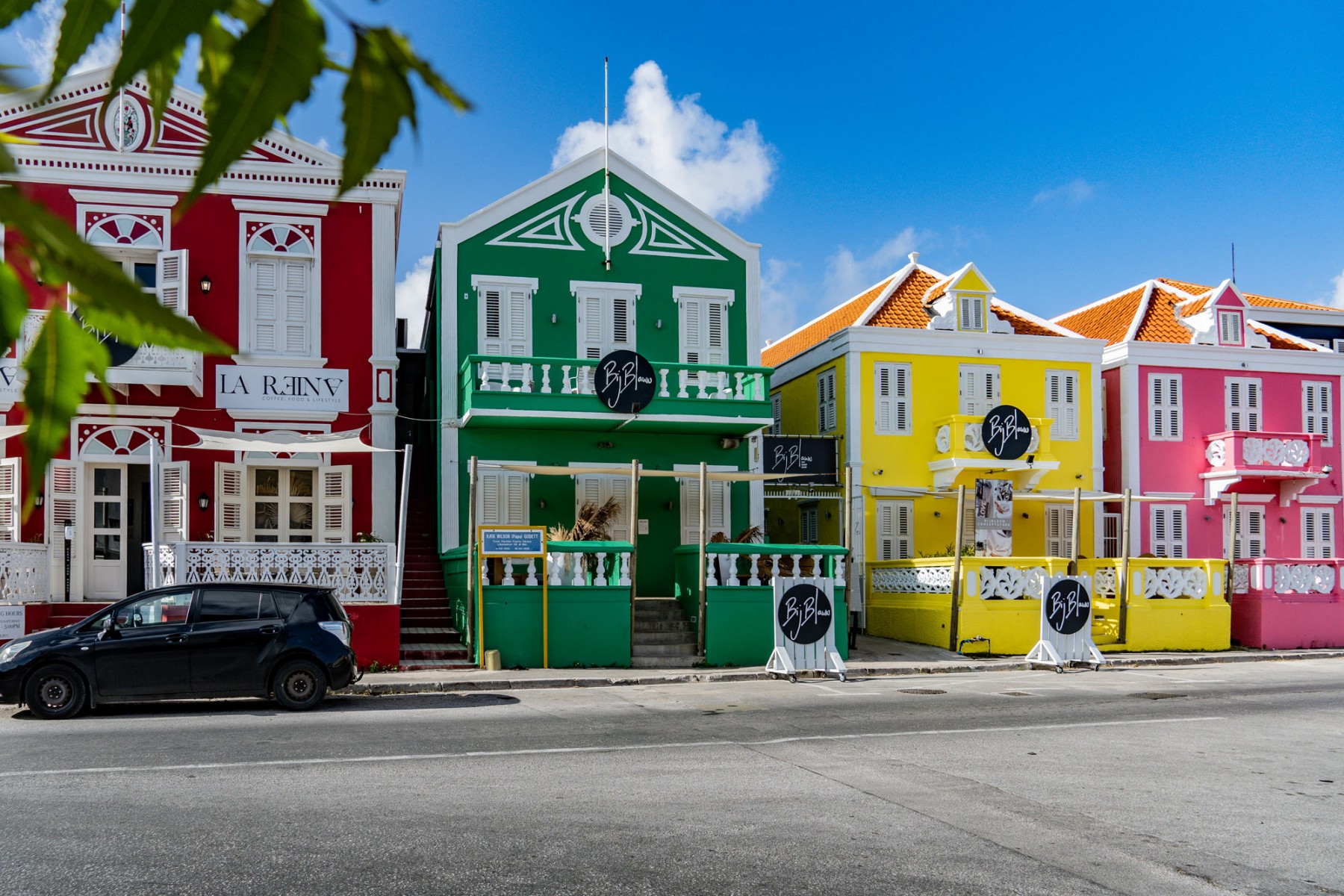 Pietermaai was developed in the 18th and 19th century and was settled by wealthy shipmasters, traders and Dutch administrators. It is characterized by a linear development of colorful luxurious mansions along the coastline. 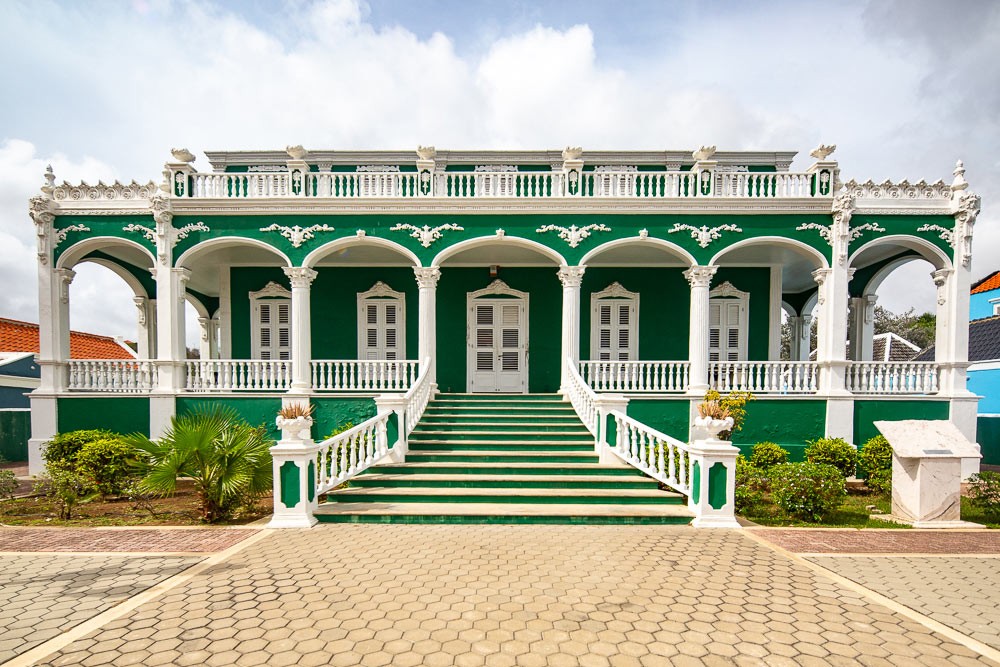 The fourth and last district of Willemstad to be developed was Scharloo. Early on, Scharloo was a plantation area, but it was later transformed into a residual district for wealthy Jewish merchants.

Willemstad’s architecture is as unique as its story. This UNESCO World Heritage City has preserved an impressive amount of its original building structures over the centuries, including many authentic architectural elements. What started off as a footprint of Dutch town-planning and architecture traditions, grew to be a culturally dynamic, breathtaking and colorful Caribbean town that tells its intriguing story through its architecture.

Curaçao Carnival: The Caribbean spectacle!
Top 10 Reasons Why Curaçao Is One The Best Vacation Destinations To Visit
Holidays in Curaçao: traditional dishes to savor during the December festivities
5 Reasons Why Curaçao Is The Ideal Destination To Escape The Winter
Why gorgeous Curacao is a great destination for ecotourists
Now Open: Sandals® Royal Curaçao Says ‘Bon Bini’ to the Dutch Caribbean
Some modules are disabled because cookies are declined. Accept cookies to experience the full functionality of this page. Learn more
ACCEPT COOKIES
We use cookies to optimize the website, no personal information is stored. Learn more
DECLINE COOKIES ACCEPT COOKIES