By: Will Travel for Food

I have recently returned from a wonderful week-long holiday on the island of Curaçao. The small Caribbean island is part of the Lesser Antilles ABC islands (Aruba, Curaçao, and Bonaire) and is located 60km north of Venezuela’s coast. It’s a former Dutch colony but is now a constituent country of the Kingdom of the Netherlands, which basically means that it’s an independent island nation with a few exceptions when it comes to government and laws. 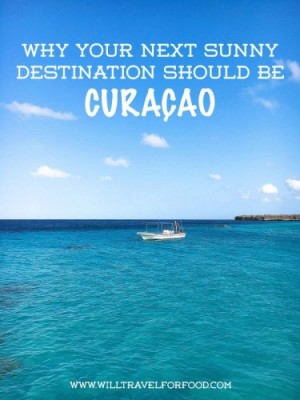 Curaçao’s capital city is Willemstad, which is where the majority of the 160 000 Curaçaoans live. The rest of the island consists of small towns and a myriad of gorgeous coves with fine sand beaches and turquoise water on the west side with a rugged and inhabitable coast on the east side of the island. Curaçao’s climate is semi-arid with a multitude of cacti and thorny bushes growing on the island. The people of Curaçao are the friendliest and so welcoming. Most speak 2 or 3 of the official languages: Papiamentu (a local language that’s a mix of Portuguese Creole, Dutch, Spanish, and some African languages), Dutch and English and quite a few also speak Spanish. The currency used on Curaçao is the Netherlands Antillean guilder (ANG) but the U.S. dollar is widely used everywhere and any bill is instantly converted into either currency, whether you’re paying cash or by card.

But apart from the great beaches, crystal blue waters and unique fauna and flora, why should you travel to Curaçao? Here’s why.

Why go to Curaçao?

It’s away from hurricanes Curaçao is outside of the hurricane belt and hasn’t had one land down on the island since the 60s.

It has great weather year roundCuraçao is close to the equator with an average temperature of 28ºC year round. The rainy season is between September and December, but Curaçao is a semi-arid island so the wet season is not as wet and rain comes in the form of short showers. This means any time is a good time to visit this beautiful island.

It’s safe: Curaçao is a safe island all around. It’s also safe to eat and drink everywhere. You can drink water from the tap and get ice in your cocktail without having to worry about getting sick.

It’s not far (from Canada) Curaçao is a 5 1/2 hour non-stop flight from Montreal and a 5-hour flight from Toronto.

It’s a diving paradise Curaçao is one of the best diving and snorkeling destinations in the world with over 70 dive spots. More on that in my next post!

It’s easily accessible The best way to visit the island is to rent a car. It’s affordable and can be done in advance. The roads are safe and easy to navigate with a GPS. Nothing is too far away, which means that you can see most of what the island has to offer during your short stay.

It has great cultureCuraçao’s capital Willemstad is a UNESCO heritage site with over 700 of its colorful buildings listed. More on Willemstad’s incredible architecture in my next post.

It’s affordable You won’t find any all-inclusive vacations in Curaçao but if you plan ahead, you can find very affordable plane tickets and accommodations. Renting a car is not that expensive and eating is very wallet-friendly depending on where you dine.

I am definitely planning on going back to Curaçao perhaps next winter. The guaranteed nice weather and those fine-sand beaches are unbeatable and I’m sure I’ll be missing the iguanas by then. (you can read the whole article by clicking here)