The Coolest Street in Holland campaign, organized in the Netherlands by the Curaçao Tourist Board (CTB), recently came to an end. 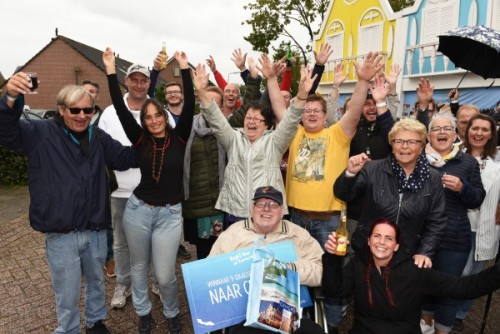 During the summer season, the Dutch public was asked to make a short video explaining why their street is the “coolest street” in the Netherlands. After the top-10 submissions were chosen by public vote, the CTB made the final decision, and the winning street was completely transformed into a Curaçao-themed avenue on National Neighborhood Day.

Yarah, who lives at De Kersenakker in the province of Utrecht in the Netherlands, managed to make her submission stand out from among all others, becoming the winner of the Coolest Street in Holland campaign. The celebration was truly special. Yarah remarks that she could hardly recognize her street. “There was something for all ages. In the end, we were there to celebrate together with all our neighbors, “Curaçao style.” That’s exactly what makes us “the Coolest Street in Holland.”

Curaçaoan Chef Justin Niessen provided everybody with the delightful “krioyo” (creole) Curaçao cuisine, including a Curaçao-style BBQ. The brass band K-RIBE got the neighbors on their feet to dance and celebrate their new title as the “Coolest Street in Holland.” At the “street party,” the CTB raffled off a 9-day trip to Curaçao for 4, with stay at the Santa Barbara Beach & Golf Resort Curaçao, which ended up going to the Vennooij family. The CTB can certainly look back at a successful promotional campaign in the Netherlands.

Curaçao Carnival: The Caribbean spectacle!
Top 10 Reasons Why Curaçao Is One The Best Vacation Destinations To Visit
Willemstad: a vibrant UNESCO World Heritage site
Holidays in Curaçao: traditional dishes to savor during the December festivities
5 Reasons Why Curaçao Is The Ideal Destination To Escape The Winter
Why gorgeous Curacao is a great destination for ecotourists
Some modules are disabled because cookies are declined. Accept cookies to experience the full functionality of this page. Learn more
ACCEPT COOKIES
We use cookies to optimize the website, no personal information is stored. Learn more
DECLINE COOKIES ACCEPT COOKIES