A Guide to Curaçao, a Laid-Back Caribbean Island With Candy-Colored Houses

Where to stay and what to see on this vibrant isle ringed with golden-sand beaches and pristine coral reefs. 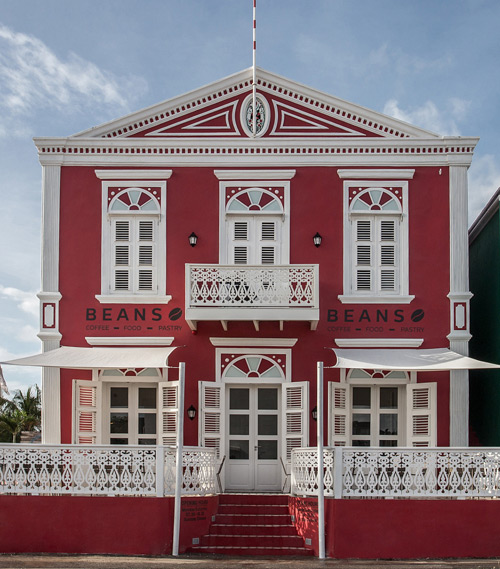 In the southern Caribbean, just 40 miles off the coast of Venezuela and 12 degrees north of the Equator, the 40-mile-long, 8-mile-wide island of Curaçao represents a lively amalgam of different cultures. Part of the Lesser Antilles, also known as the ABC Islands — Aruba is to the west, Bonaire to the east — Curaçao was once a booming trade hub for merchants in the Dutch West India Company. Drawn to the island’s abundance of salt and its enclosed natural harbor, Schottegat, they settled on Curaçao in the mid-17th century and led the West African slave trade from its capital port city of Willemstad. Following the abolition of slavery in the 19th century, Curaçao fell into ruin but was later revived, in the 20th century, during a boom in Venezuela’s oil trade; in 2010, the country was granted autonomy by the dissolution of the Netherlands Antilles.

Today, travelers stroll along Willemstad’s Handelskade Street, lined with sherbet-colored homes that resemble Amsterdam rowhouses, and stay in former Dutch colonial buildings now reimagined as luxurious beach resorts. In the center of Willemstad, near the cobblestone alleyways of the buzzy Otrobanda district, the island’s proximity to South America is most pronounced at the floating food market, where Venezuelan traders sell produce — mangos, melons and coconuts — to the restaurants of Curaçao’s thriving culinary scene, centered in the city’s Pietermaai district. With over 35 palm-lined beaches, 65 dive sites to explore and friendly locals who represent over 55 cultures, Curaçao is quickly garnering appeal as one of the most progressive and pristine islands in the Caribbean.

A Guide to Curaçao, a Laid-Back Caribbean Island With Candy-Colored Houses

CURACAO, YOUR NEXT CARIBBEAN WELLNESS DESTINATION - PART 2
Curaçao, Your Next Caribbean Wellness Destination
5 reasons why Curaçao should be your next sunny destination
Fabien Cousteau’s PROTEUS™, the ISS of the Sea, Breaks Ground in Curaçao
Explore 5 Breathtaking Beaches & Bays on the West Side of Curaçao in One Day
8 Curaçao restaurants that’ll give you a taste of this beautiful island
Some modules are disabled because cookies are declined. Accept cookies to experience the full functionality of this page.
ACCEPT COOKIES
We use cookies to optimize the website, no personal information is stored. Learn more
DECLINE COOKIES ACCEPT COOKIES