For travelers seeking something a little different, this former Dutch colonial outpost offers culture and luxury.

The drive into the capital of Curaçao, the Dutch Caribbean outpost that is the “C” in the ABC islands, allows you to pass by the usual colorful privation of the Caribbean, tiny houses of cracked cinderblocks painted in bright corals and greens, the yards stripped of vegetation by goats and chickens, the homes interspersed with the roadside restaurants that serve as fast food, where workers in dusty boots queue up in front of barred windows for meat pies so rich grease runs to their elbows.

This island, blessedly out of the path of most hurricanes, is a contrast of options, of a centuries-old city and modern seaside resorts, of poverty and affluence, of waves crashing against limestone sharp with the bodies of ancient crustaceans, and of tranquil cerulean bays where a thick purple horizon separates the sea from the sky, and the water is clear as rippled glass. 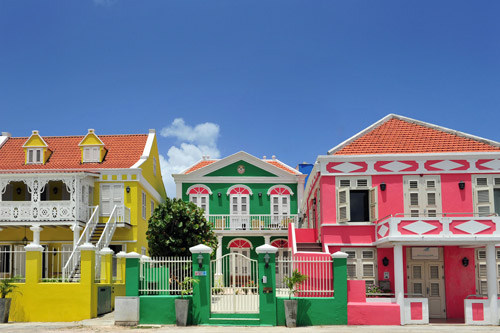 Though Curaçao is less polished than some of its neighbors, it still ranks fourth on Business Insider’s list of the best Caribbean islands, with more than 65 sites for snorkeling and scuba diving, plus caves and beaches and the historic city of Willemstad.

But within the gates of the resort Sonesta Kura Hulanda Village, all is grand Dutch colonial glory. Mirrors are framed in more mirrors, or surrounded by gilt. Glass cases sparkle with dynastic Dutch art of pounded gold embedded with jewels. Outside are bronzes of heavy-breasted slave women, one after another, leading to the Museum Kura Hulanda, a resonant and terrifying memorial to the region’s role in the slave trade.

In 1998 this village was decaying ruins, its wedding cake architecture crumbling, its shutters askew and its carved trim work rotting. Today it is part of a UNESCO World Heritage site, an homage to the far-flung Dutch empire with its street cobbles carved in India, the iron for the curving stairs worked in Colombia, the lanterns recovered from a Dutch trading post in Indonesia.

Curaçao was “discovered” in 1499 by a lieutenant of Christopher Columbus and settled by the Spanish. A century-plus later it was captured by the Dutch and – barring a few back-and-forths – it has remained that way ever since, though it became an independent part of the Netherlands in 2010.

The Dutch influence shows in the architecture, in the pinks and blues and shocking yellows of the businesses along the Sint Annabaai (the St. Anna Bay), which is reached across a floating pedestrian bridge that swings wide 30 times a day, so some 3,000 ships a year can pass into the harbor.