Curaçao’s “Feel it for Yourself” Campaign Launched in Charlotte, North Carolina

Following the launch of the new “Feel it for Yourself” campaign in New York and Miami, the Curaçao Tourist Board (CTB) continues to expand the island’s presence on the market in Charlotte, North Carolina, thereby supporting the weekly non-stop flights operated by American Airlines. 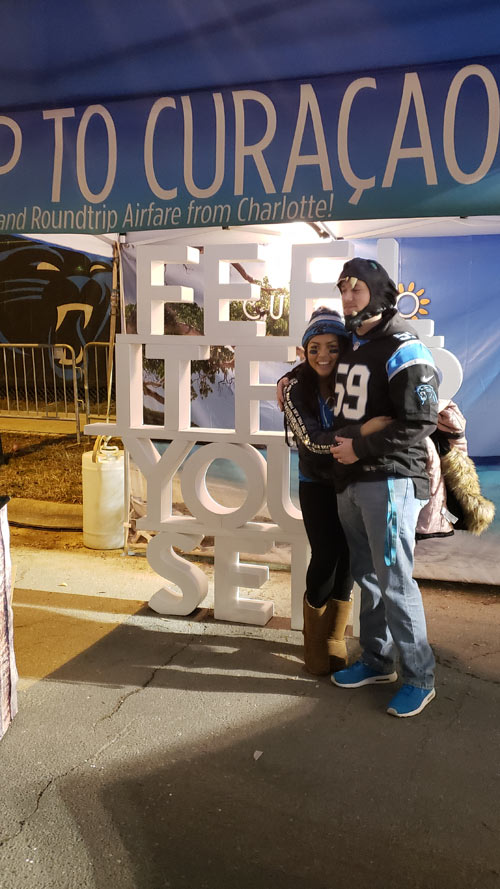 Curaçao is being promoted as the premier Caribbean destination for this winter season, piquing the curiosity of consumers in Charlotte to come and get acquainted with our lovely (“dushi”) island. The campaign will run until the end of February 2019.

As part of its efforts in Charlotte, the CTB has partnered with the Carolina Panthers—the professional football team based in Charlotte, North Carolina. The team plays in the National Football League as a member club of the NFC South division. The Carolina Panthers are a true icon in the Charlotte community, delivering a unique experience of vibrant unity and patriotism among the residents. The collaboration with the Carolina Panthers provides Curaçao the opportunity to promote the new branding campaign in the community of Charlotte. A total of 76 percent of Charlotte’s population 21-years-old and over identify themselves as Panthers fans.

The partnership with the Panthers includes promotional pre-game radio spots, spots during regular season games on the Panthers radio network broadcast, aired locally on WBT 1110AM, and posts on the team’s social media as well as on those of Carolina Panthers wide receiver, Curtis Samuel. The CTB also organized an event at the “Panthers on Mint”, an area outside the stadium where fans interact with vendors. There, the CTB, in collaboration with Santa Barbara Beach Resort Curaçao and American Airlines, offered a raffle for a trip to Curaçao. This particular game was attended by a huge crowd of 74,188 fans.

In addition to the partnership with the Carolina Panthers, the CTB has also activated a publicity campaign with 20 large-format ads on transit, including on the LYNX Blue Line Light Rail in Charlotte. Approximately 16,400 passengers travel this route on a daily basis. Curaçao will also be promoted on screens located on the platforms used by consumers for their daily commute.

Curaçao’s “Feel it for Yourself” Campaign Launched in Charlotte, North Carolina

Holidays in Curaçao: traditional dishes to savor during the December festivities
5 Reasons Why Curaçao Is The Ideal Destination To Escape The Winter
Why gorgeous Curacao is a great destination for ecotourists
Now Open: Sandals® Royal Curaçao Says ‘Bon Bini’ to the Dutch Caribbean
Destination Curaçao - The Family Trip Your Kids Wants You To Book Part 2 - Banda Abou Side
Curaçao Cuisine Defined by These Local Tastemakers
Some modules are disabled because cookies are declined. Accept cookies to experience the full functionality of this page.
ACCEPT COOKIES
We use cookies to optimize the website, no personal information is stored. Learn more
DECLINE COOKIES ACCEPT COOKIES