In my travels across the Caribbean, I’ve often wondered why the accents across certain islands are so different despite their shared language. Why the sing-song of Trinidadian prose and playful ebbing and flowing of Virgin Islanders while the swift gallop of Jamaican patois?

Surely a similar situation exists among the French, Spanish, and Dutch islands, but where do these different accents come from? Why is it that each island has a dialect apart from the official language and distinct from the other islands sharing the same official language? Curiosity set me off on an investigation that uncovered some pretty interesting stuff. 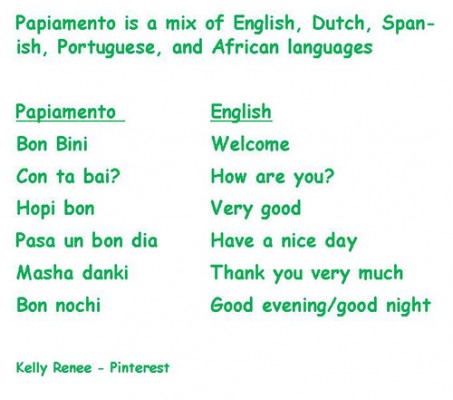 First of all, we can debunk the common belief that Creole in the Caribbean is spoken only by Haitians, St. Lucians, and Dominicans. “Creole” may be the name given to the dialect these people speak, but the term actually refers to any language born of a need for communication between people speaking different languages. When slaves were brought over to the Caribbean, there would have been communication barriers among them (people from different tribes ended up on the same plantation) and between them and their European masters. A simple set of vocabulary had to be adopted for day-to-day living, the result of which was a new hybrid that borrowed from the multitude of African tongues present and those of their European oppressors. This “pidgeon” would become the mother tongue of subsequent generations, evolving and developing over time into a full fledged language with complex grammar rules and vocabulary.

Discovering this was my “aha!” moment. This explained the rainbow of accents from the paisaje de campo of Cuba to the “heights and terraces” of Antigua and from the klein steden of Curacao to les montagnes of Guadeloupe.

The Most Romantic Things To Do During Your Stay On Curacao - Part 1
CURACAO, YOUR NEXT CARIBBEAN WELLNESS DESTINATION - PART 2
Curaçao, Your Next Caribbean Wellness Destination
5 reasons why Curaçao should be your next sunny destination
Fabien Cousteau’s PROTEUS™, the ISS of the Sea, Breaks Ground in Curaçao
Explore 5 Breathtaking Beaches & Bays on the West Side of Curaçao in One Day
Some modules are disabled because cookies are declined. Accept cookies to experience the full functionality of this page.
ACCEPT COOKIES
We use cookies to optimize the website, no personal information is stored. Learn more
DECLINE COOKIES ACCEPT COOKIES