Spotify was just a baby when it launched in October 2008. Bitcoin was merely an idea when Satoshi Nakamoto published a paper titled Bitcoin: A Peer-To-Peer Electronic Cash System the next month. A decade ago, the world was pretty different. 2008 was also the last time that Christina Aguilera went on a world tour.

She’s kept busy since then, with a pair of albums (2010’s Bionic and 2012’s Lotus, neither of which she toured behind), television work, movie appearances, and even a big performance here and there. Playing an occasional few songs on stage at an award show is radically different than the rigors of an extensive tour, though.

Soon, Aguilera will head back out on the road. Very soon, actually: She just dropped her eighth album, Liberation, in June, and announced that her first tour in ten years will kick off in Florida tomorrow. She’s actually played a handful of shows already this year, and after seeing her performance at the Curaçao North Sea Jazz festival firsthand, I can confirm that she’s ready for her return.

Aguilera isn’t the only one making a comeback this year. The Curaçao North Sea Jazz Festival — a Caribbean spin-off of the flagship event in the Netherlands, which itself has been held annually since 1976 — was canceled in 2017 after it was unable to secure high-quality headliners (which they themselves admitted). This year, however, the fest did just fine on that front, with Aguilera closing out the final day of the event, which ran from August 30 to September 1. While there was the potential that she might need to kick off some rust after a period of relative dormancy, instead, she came across rested and eager.

Aguilera hit all the right notes (as this fan-made video of the performance’s highlights quite literally demonstrates) and never once took it easy during her 14-song set. She stuck to the classics (only playing one Liberation song, “Fall In Line“) and sounded powerful belting them out. She wasn’t about to let the world forget that she remains one of the most talented and technically sound singers in the history of recorded music, even after an extended break. 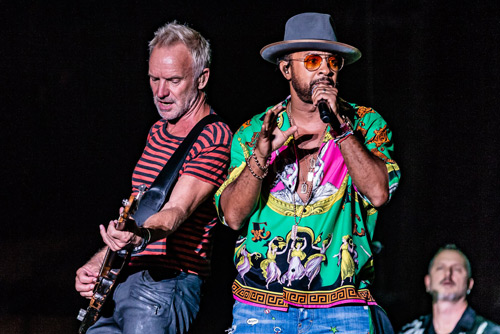 The event’s bill was plenty stacked aside from her, too, with an eclectic group of performers taking the stage over the three days. Patti LaBelle proved that she hasn’t lost a step after 74 years on this earth by giving one of the festival’s strongest performances, and songwriting legend Burt Bacharach, who is an astounding 90 years old, peppered his set with fascinating stories about the extraordinary talents with whom he’s worked over the years. Sting and Shaggy also continued to justify their unexpected partnership with a fun performance, Grace Jones was as enigmatic as ever, and Daddy Yankee was an energetic last-minute replacement for Sean Paul, who was unable to make it for his scheduled set due to injury.

What really makes Curaçao North Sea Jazz a solid destination festival is that it places equal emphasis on destination and festival. Performances started no earlier than 7 PM on all three nights, so instead of spending all day on the festival grounds and not actually seeing much of what’s going on outside of that non-representative area, attendees had all morning and afternoon to check out the local attractions and get a real feel for the destination.

Read the full article, originally published in September 2018, on Uproxx.

Willemstad: a vibrant UNESCO World Heritage site
Holidays in Curaçao: traditional dishes to savor during the December festivities
5 Reasons Why Curaçao Is The Ideal Destination To Escape The Winter
Why gorgeous Curacao is a great destination for ecotourists
Now Open: Sandals® Royal Curaçao Says ‘Bon Bini’ to the Dutch Caribbean
Destination Curaçao - The Family Trip Your Kids Wants You To Book Part 2 - Banda Abou Side
Some modules are disabled because cookies are declined. Accept cookies to experience the full functionality of this page.
ACCEPT COOKIES
We use cookies to optimize the website, no personal information is stored. Learn more
DECLINE COOKIES ACCEPT COOKIES